My gay world just got a little bit bigger 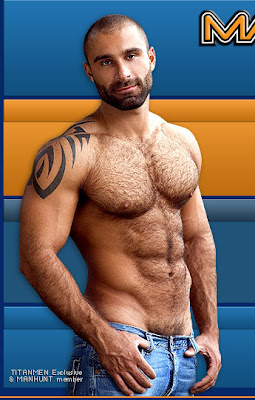 Isn't he just HOT?!?! He's one of the guys whose images appear on manhunt.net's homepage.

Ok now that we have the hot guy out of the way we can move on to some more serious stuff. At some point along my blog travels i came across a blog, written by any orthodox jewish father, which he began after his son came out. (Yeah every jewish mother's nightmare, lol). I had been reading the blog, and then a couple weeks ago i thought, why don't i get in touch with his son. I emailed him and his son was willing to contact me, so i thought great! We've been emailing back and forth, and its been great to be able to chat with someone on a similar page as me. We may have slightly different backgrounds, but we're both struggling with the same thing. Maybe we can help each other get though it, or at least get over the stumbling blocks that are holding us (me?!) back.

Anyway so we were chatting, i knew his first name, he knew me as Jay, which he knew wasn't my name. I started thinking about coming out to him. So i just asked him, "are you on facebook?" Which has been the classic line, amongst some people i know. They meet someone, or get introduced to someone, the next question is are you on facebook. And he was, so i thought well it couldn't be that bad. I was tossing up between telling him who i was and keeping it to myself. On one hand, we had only been chatting a short time, on the other we were in a similar position. I wasn't sure what to do.

And then i thought back to when i came out to HGF. I had no idea what it would be like, to actually tell someone my name is _______ and i'm gay.( Sounds kinda like an AA group meeting, lol). But i did it, and waited for my life to fall apart, only it didn't, and i guess i always knew it wouldn't, but you never know until you step over the edge. So i thought how bad can it be? So i did it again. It was easier this time around, in that i'd had some experience doing it before. But it still wasn't easy. And i'm not comfortable telling people around me. My family, my friends. I'm not ready to tell anyone close to me. But it's a first step, and thats what matters.

BTW, CCB was in the same room the whole time this was going on, lol. Maybe i should let him in on the secret ;)

PS His dad's blog is at kirtzono.blogspot.com
Posted by Jay at 9:05 AM

Hang in, Jay. It keeps getting easier and easier. But do be ready for the fact that coming out is never really over. As you meet new people or join new institutions, there will always be more and more people to come out to. After a while it becomes second nature.

I agree with Will, and it's great that you feel comfortable telling someone else, but everyone's story is different.

The burden of your past may prevent it from ever becoming second nature but you have time on your side and a desire to conquer this challenge.

You'll get there my friend and in years to come look back and it will be interesting to hear your story from hindsight. x

PS, the guy is a little hairy for me.

Ah, but oh so right for me, anonymous! As you say everyone's story is different.

thanks! I guess only time will tell

The fact is that you've left enough hints everywhere that anyone with half a brain can figure out who you are, the cities you relate to, your work, be'er lachai, c'est la Vie.

So, does it make a difference? You're pretty open, brave, creative, talented.

If you marry someone legally here, instant green card. If not, in and out is the status quo, and the Jewish way.

I guess i have left hints every now and then. But a person needs to know what to look for for them to figure it out, so if it happens, it happens.

And yes it looks like in and out is the only way for me...